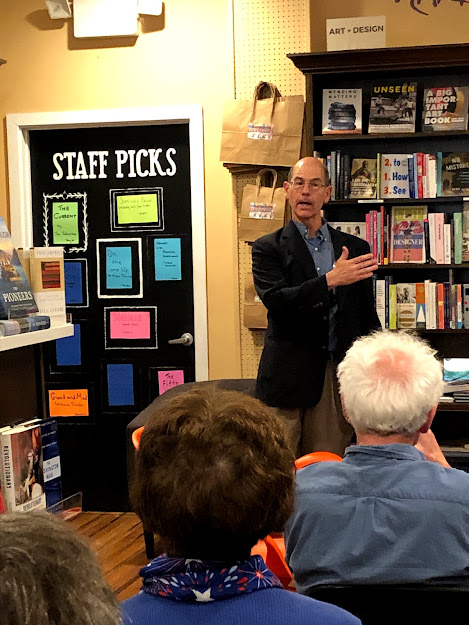 Many thanks to all who braved storm threats to join me at Narberth Bookshop on May 30 for a reading from Busara Road. And a special thanks to that fabulous bookstore family for making me feel so welcome!

Here’s a link to some photos:

The rain let up and sun came out on Sunday, April 28, for the 2019 Fairmount Avenue Arts Festival. Had a fun time representing New Door Books for a reading from my novel, Busara Road, and had the pleasure of being followed onstage by Debra Leigh Scott, who read from her wonderful story collection, Other Likely Stories, published by Sowilo Press.

Check me out on IndieGoGo HERE!

I have launched an IndieGoGo campaign to help me get to Kenya in December for an international writing seminar in Nairobi and Lamu and, afterward, a trip back to the Quaker Mission in western Kenya where I lived as a kid.

I’ve posted a video on my IndieGoGo site that talks about the campaign, the novel, and the trip. You’ll also find some fun perks that you can get for contributing, and some easy linking tools to spread the word about the campaign.

David Sanders has had his short fiction, plays, and novel excerpts published in literary journals that include Sycamore Review, The Laurel Review, Baltimore Review, Philadelphia Stories, Talking Stick Review, Schuylkill Valley Journal, Bucks County Review, and others, and published in anthologies that include Philly Fiction, The Best of Philadelphia Stories, and 2000 Voices.

He is a winner of the 2006 Benjamin Franklin Tercentenary Autobiography Project, the 2005 Third Coast national fiction competition, a two-time finalist for the SLS International Fiction Contest, and a finalist for the Crescent Review’s Renwick-Sumerwell Prize and the New Letters National Fiction Award. His fiction has been broadcast on public radio and his short plays have been produced by Philadelphia’s InterAct Theatre Company and Brick Playhouse. He has also been named a Writing Fellow and Artist in Residence at the New York Mills Regional Cultural Center in Minnesota, and selected for numerous writer’s residencies at the Virginia Center for the Creative Arts and the Vermont Studio Center.

In addition, his essays, reviews, and articles have appeared in numerous national and regional magazines, newspapers, and journals, including Harvard Educational Review, Bostonia Magazine, Philadelphia Inquirer, Woodworker, and many others, and have been recognized with awards that include four CASE Awards, two IABC Epic Awards, and the Jesse H. Neal Medal.

David was the founder and curator/director of Writing Aloud, the “Best of Philly” performance series of short fiction read by professional actors at InterAct Theatre Company in Philadelphia and broadcast on public radio. He is a member of the editorial board for New Door Books, and has served as a writing instructor at the University of Pennsylvania and as a member of the editorial advisory board for New City Press at Temple University. He has also served as the editor of periodicals and other publications at Harvard University, Boston University, the University of Pennsylvania, Winterthur Museum and Gardens, WXPN-FM public radio, and elsewhere. He has held positions as President or Vice President of three communications consulting firms and has served as an arts administrator for performing companies that include Boston Concert Opera, American Repertory Theater, Danceworks Dance Company, Agassiz Drama Program, and Pilgrim’s Progress Theater.  David earned his M.B.A. in non-profit and public management at Boston University, Ed.M. in administration, planning, and social policy at Harvard University, and B.A. in Humanities at New College of California.